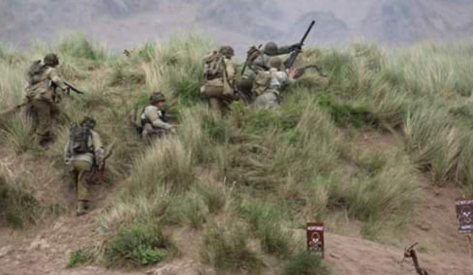 Squad leaders.--Squad leaders are charged with the movement of their squads to designated locations; the selection, preparation, and occupation of firing positions; entrenchment; camouflage; observation and adjustment of fire; fire discipline: and the employment of ammunition bearers to replenish the ammunition supply.

The light machine-gun section may be assigned a definite target or a sector of fire. If assigned a definite target, the section leader determines the method of engaging it. As a general rule, most effective results are obtained by the simultaneous concentration of the fire of both guns on the same target. The section leader, in conformity with the platoon leader's orders, designates the targets, specifies the rate of fire, and gives the command or signal for opening fire. Whenever practicable, he establishes contact with the rifle unit leaders in his vicinity and informs himself as to their situation and intentions.

If assigned a sector of fire, the section leader may divide the sector, giving a part to each squad, or he may engage targets in the entire sector by the fire of both squads.

When the squads have been assigned sectors of fire, each squad leader takes, as his primary mission, fire on the targets developing in his own sector, and as a secondary mission, fire on those targets developing in the adjacent sector. When the squad leader acts entirely on his own initiative, he decides how he can best support the general plan of the company and leads his squad accordingly.

During many of the battle displays run by History In The Making we are issued with 2 x blank firing 30 Cal Machine guns for the weapons platoon to use.

The 30 Cal's give us the firepower we need to advance on enemy positions or defend ourselves from attack.

Every Rifleman in C-Company is trained on the firing and loading of the 30 Cal Machine gun.